Rating:
User Rating:
Game Information: Louisiana Double is a somewhat obscure game that you won’t find in every live casino in the world, but you will be able to play at most online casinos. The game offers much lower variance than many other video poker machines, but also includes a much higher house edge which means it will be harder to beat in the long run. The game is featured at many Microgaming casinos, with a house edge as high as 6.55%, one of the absolute highest in the online gambling world, higher than most video slots even. This makes the game less than favorable for the player, but its interesting gameplay and relatively low variance make it fun to play, which means a lot to many casino players. 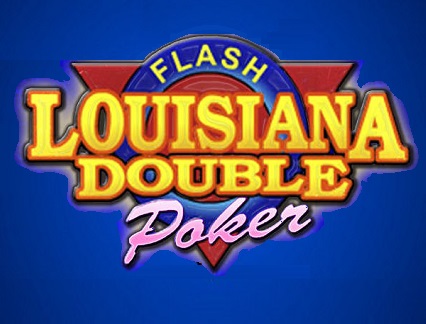 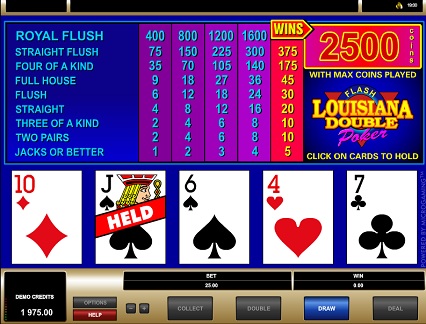 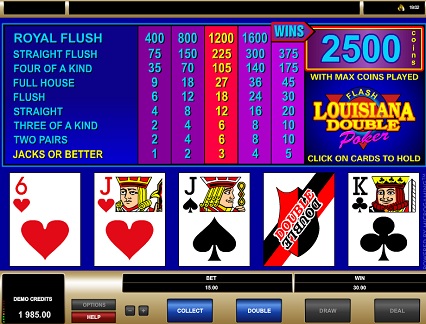 Get your $1500 bonus
Play now for real money

The rules of Louisiana Double do not differ too much from other video poker games, with the exception of one card being added to the deck, making it a 53 card deck instead of a regular 52 card deck. The 53 card deck holds a Double card, which will double any win in the hand it was dealt in, but will not serve as any kind of a substitute, joker or in any was a part of the hand in question.

The player has to select how many coins to bet at the start of Louisiana Double gameplay, with anywhere between 1 and 5 coins available, but five coins always being the recommended amount as the house edge drops a bit when you play maximum coins. The house edge at 1 – 4 coins is 6.73% while at 5 coins it is only 6.55%.

When you are ready to start, simply click the deal hand button and five random cards are dealt to you. You can then pick to discard as many of these as you want or leave them all in place and collect your payouts. The payouts are made according to a table of payouts which pays more for strong poker hands and less for the less valuable ones. Here is the Louisiana Double paytable at 5 coins:

As you can tell from the paytable, the payouts in this game are somewhat lower than many other video poker variations, but the extra Double card can sometimes make your payments for combinations up to four of a kind doubled. This still does not compensate for the low payouts in general and the fact pairs under kings are not paid, and the game remains one of the least valuable video poker variations.

As far as it comes to actually playing the game, you will still need to play a sound and reasonable strategy to even keep the house edge at 6.55% and not higher. This means not chasing unrealistic draws and going after the ones that are mathematically sound.

What is more, you will have the Double card come into play, and if this card is dealt, you will have to keep it along with any kings or aces, hoping to be able to make at least a pair of kings after you have discarded the other cards.

We recommend playing a bit higher stakes than you may in other video poker variations as the variance is a bit lower, and also always playing 5 coins per hand as this significantly reduces the house edge which is a bit higher when you play fewer than 5 coins.

On the other hand, Louisiana Double is much more fun and less mundane than many other video pokers, and if you are looking to unwind and have some fun, it may be more interesting to play this game for a while.

Keeping in mind the relatively high house edge, if you still want to give the game a shot and test your luck with the double payouts, which certainly do happen, you can check it the best online casinos and play with the extra bonus money offered by the operators, which significantly increases your chance of walking away a winner.