Rating:
User Rating:
Game Information: Another very popular game variation, European blackjack is offered by a number of online casinos while you may or may not find it in the land based establishments. Larger casinos will often offer this variation, while the smaller ones will usually stick to more traditional choices.European blackjack is played with two full decks, totaling 104 cards (no Jokers). Game rules are quite simple and easy to learn. This article is here to help you learn the basic rules and to offer a few useful tips you can apply at the tables. 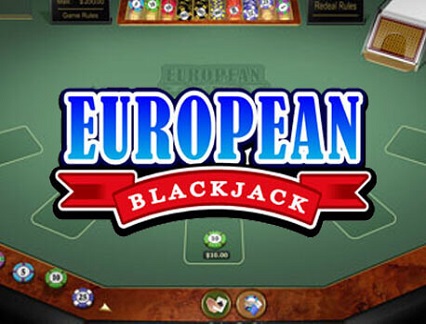 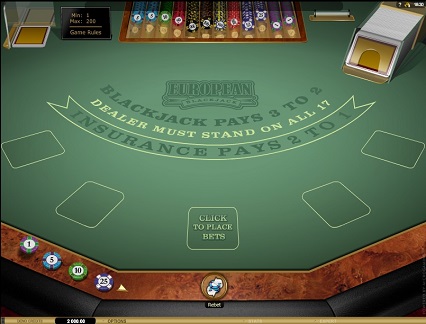 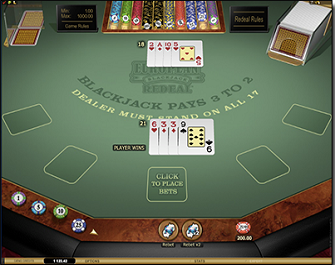 All players who placed their bets at the table will receive two cards, face up. The dealer will also take two cards, but only one of these cards will be known to players, while the other one remains hidden until all players had made their decisions.

The goal of the game is reaching as close to 21 as possible without going over (busting). If a player makes 21 on their first two cards, this is known as Natural or blackjack. In most online and land based casinos, this combination will pay 3:2.

Once all cards are dealt, the action will start with the leftmost player at the table, and he / she will have an option to Hit, i.e. ask for another card to improve their total count, or Stand, indicating they are happy with their hand and the action can move on to the next player. During this phase, if any of the players requests a card and their total count reaches over 21, they are considered Bust and the dealer takes their bet.

Once all players make their decisions, the dealer turns over his second card. It is important to note that there is no “peeking” in European blackjack, meaning that the dealer will not check out his second card to see if he has a Natural. So, you can make all the best moves, splits, doubles, etc. only to find out that you lose to a hidden blackjack. This is something to keep in mind at all times.

If there is no blackjack, the dealer will either take another card if his total count is 16 or under or stand if he has 17 or better. The same rule applies after he takes the third card and continues to apply until he either reaches 17+ or busts. If the dealer busts, all players with live bets win regardless of their count. Otherwise, hand strengths are compared, and only players with a higher total than the dealer will win.

When it comes to special rules and decisions, there are a few things to observe about European Blackjack.

Other than these brief guidelines, you should also be aware that decks are usually reshuffled after every deal, which makes card counting impossible. This, of course, is not relevant for online casino players, but it is good to know for brick & mortar establishments.

European blackjack is the game variation that will appeal to online and brick & mortar players alike. Due to the fact that decks are shuffled after each hand, there isn’t much difference between playing live at an online casino.

Some players will also like the fact that you can only double on particular hands (9, 10, 11), making their decisions easier. While this may take away some of the possibilities, it will also remove mistakes of doubling in bad situations.

On the other hand, for card counters and advantage players, European blackjack is definitely not the game to pick. With so little available information and rather limited options, they could feel that there is simply not enough room to use their knowledge and profit from it.

You alone should decide whether or not European blackjack is for you, but if you are interested in playing some hands, most of our Canada specific casinos like Spin Palace and Royal Vegas have this game on their repertoire, so feel free to check them out.