Rating:
User Rating:
Game Information: Video poker has garnered a lot of popularity in the casino industry thanks to several facts. First and foremost, the game is based on the game of poker, one of the favorite pastimes of people from all over the globe. Secondly, it is one of rare casino games where you can actually negate (or almost negate) the house edge by applying proper strategy. There are various video poker iterations out there, and while they all seem quite similar, proper strategies and correct gameplay can differ quite significantly. This article will focus on the popular Double Double Video Poker variation, available at a number of our recommended Canadian casinos. 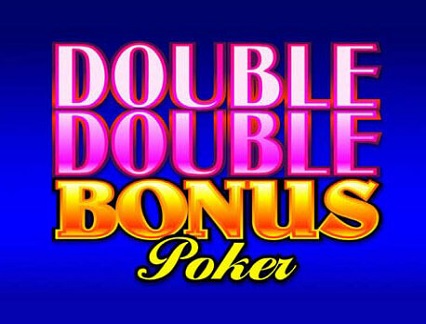 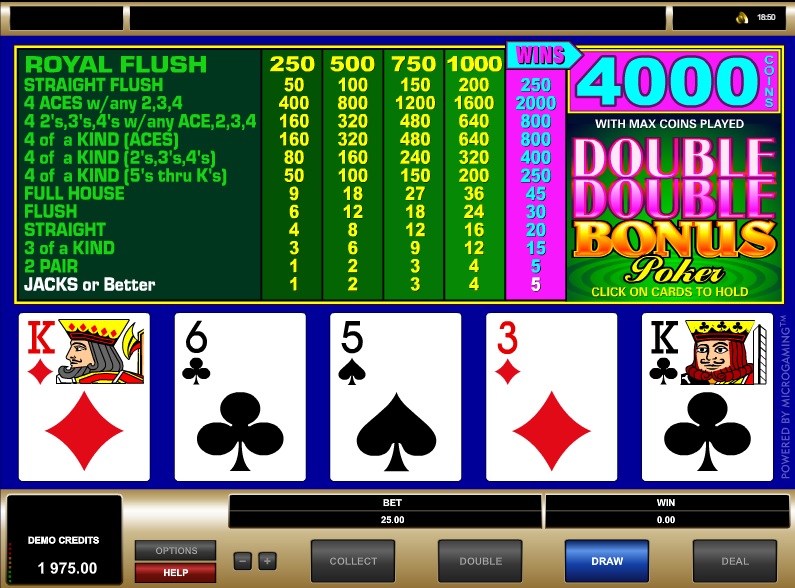 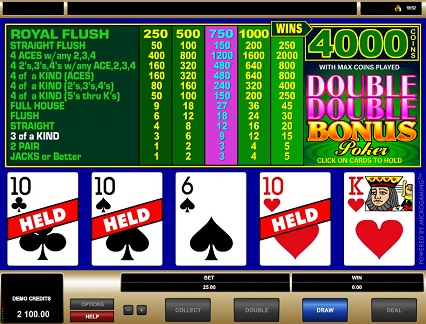 All video pokers play quite similarly, and Double Double Bonus video poker is not an exception. The game uses a standard deck of 52 cards (no Jokers), and from the deck, a player is dealt out a five-card hand. He or she then chooses which cards to keep and which cards to discard and there is another deal. After that, there is no more dealing and the player’s hand is complete. Payouts are made according to the player’s hand strength.

The rest of the game plays similarly to Jacks or Better. The payout table is practically identical, so if you’ve played Jacks or Better before, you will not be stranger to Double Double Bonus either. Paid hands range from the Royal Flush (biggest payout) all the way to a single pair of Jacks (lowest payout). Pairs under Jacks (10s and lower) do not pay.

As mentioned, video poker may seem fairly simple to play, but if proper strategy is not observed, the game can provide the house with a significant edge. This is particularly true for Double Double bonus variation, which features almost double the variance found in Jacks or Better.

Detailed strategy for Double Double Bonus is, in fact, rather complex and comprehensive, but, if observed, it can reduce the house edge to around 1% to 1.1%. Here are a few quick, easy to remember tips on what hands to keep after the initial deal:

One of the most important strategy differences to observe between Double Double Bonus and Jacks Or Better is the fact that you would never break the full house in the latter variation. However, in Double Double, if you have Aces full, it is worth breaking it to try and hit four Aces and score that big jackpot payout. Similarly, breaking two pair and holding only onto a pair of Aces is a valid strategy once again driven by the big payout for Quad Aces.

These changes to strategy also a reason why there is more volatility connected with Double Double Bonus video poker. Since you simply have to chase those big jackpots, you will sometimes have to pass on a decent payout and simply trust your luck.

This particular video poker variation is a lot of fun to play, because you can hit a big payday at any moment. All it takes is little luck and you will hit those quads, bringing about a windfall of cash. For this reason, Double Double Bonus video poker is hugely popular among players. Unlike the more methodical Jacks or Better, this video poker variation is more about those big wins than consistent but modest ones.

On the other hand, the game can be very volatile and it requires bigger bankroll. If things don’t go your way from the start, you can quickly find yourself stuck quite a lot. This is not a big problem if you have a big enough bankroll to survive the variance, as things will even out eventually, but if you are on a short roll, you should probably stick to calmer, more moderate video pokers.

A number of our online casinos offer Double Double Bonus video poker variation to Canadian players. Visit Royal Vegas or 888 Casino, sign up for an account, and use your bonus money to get you started. While game contributions from video poker are generally low, it doesn’t mean that you can’t use the bonus money to have some fun and try to find that nice bonus combo!